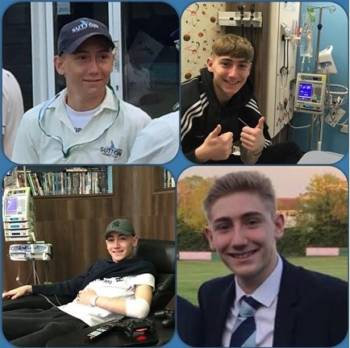 Joe Lunn is 17 years old and a member of Sutton Cricket Club, something he has been since he was 7. He has been undergoing chemotherapy at the Royal Marsden Hospital for a rare form of cancer known as Synovial Sarcoma.  The Teenage Cancer Trust supports the unit where Joe’s treatment is taking place and Sutton Cricket Club helped to raise funds for this charity. Follow the link to a letter from Dave Lunn.

There were several initiatives run during and around the Sutton Cricket Club Cricket Week, which can be seen below, and all of these initiatives helped us raise a staggering £3268.27, so thanks to everyone who donated.

There is also a wall where you can post messages of Support for Joe – please use the this link.