The Times newspaper has published an excellent obituary for our president Ken Ohlson: 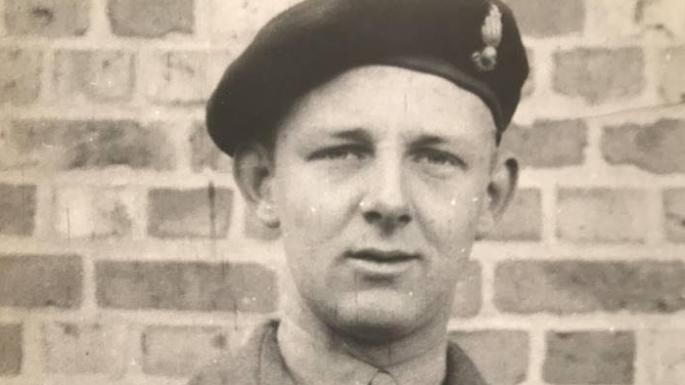 Ken Ohlson’s mantra was: “Never let the truth get in the way of a good story.” Whether as an after-dinner speaker or in everyday conversation, he was an engaging raconteur, and a persistent practical joker, occasionally with unintended consequences.

His wife, responding to a telephone call from a travel agent informing her that their imminent two-week holiday in Italy had been cancelled, invoked the response: “Ha ha, very funny, darling!” The Thomas Cook representative had to call four times before the sad reality dawned that the call was genuine.

Ohlson was not to be deterred and continued this jocular regime throughout his life, which nonetheless featured several moments of great drama from which he was unable to extract little by way of amusement; none more so than as a 20-year-old gunner forward observation officer supporting 7th Battalion Seaforth Highlanders advancing on Kleve, southeast of Nijmegen, in the Netherlands on February 12, 1945.

Part of the 46th Highland Brigade, the Seaforths were mounted in Kangaroo armoured personnel carriers, while Ohlson and his fire-support team were travelling in a Churchill tank with communications on his regimental radio net. They were under orders to advance briskly from Kleve, but heavy rain had left the ground waterlogged.

The advance had scarcely begun under low cloud and mist, with visibility down to 500 yards, when the leading company came under fire and their forward observation officer was killed. Ohlson asked permission to go forward and replace him, but was told to support another Seaforth company and identify artillery targets, which would allow the advance to continue. While the German defence was resolute and the British infantry again encountered fierce opposition, forcing the second Seaforth company to withdraw, Ohlson brought his battery’s eight guns to bear on the enemy positions.

Seeing the extent of the German entrenchments, he called for all 24 of his regiment’s guns to concentrate their fire, which subdued the opposition. Noticing survivors of the leading platoons taking cover wherever they could, Ohlson called them aboard his tank and brought 32 men to safety. By his swift thinking in deteriorating conditions, he let the initiative be regained. He was awarded an immediate Military Cross for his courage and initiative.

Not that his war was over. He took part in the Rhine crossing on March 23-24, 1945 when the BBC reporter Wynford Vaughan-Thomas broadcast a commentary on the operation from the amphibious vehicle in which Ohlson’s unit were making the assault.

Kenneth Banks Ohlson was born in Streatham, south London, in 1924. The son of Frederick and Elsie Ohlson, he was educated at Eastbourne College. His father was apprehensive about the upper end of the labour market being flooded with ex-servicemen seeking jobs after the war and plucked him out of school early. He was sent on a wartime six-month university course at Newcastle and then began work with the Lloyd’s brokers Woods and Maslen. He rejoined the company on demobilisation.

In 1954 he married Jill Thain, elder daughter of Caryl Thain, the Surrey county cricketer. They had three sons: Richard, a Lloyd’s insurer; Christopher, a ship broker; and Jonny, a biotechnology entrepreneur; and a daughter, Hilary, an investment banker who survived the Battersea Park big dipper accident in 1972 in which five children died. Ohlson never lost his sense of thankfulness that she was not among the victims. His wife and children survive him.

He moved from Woods and Maslen to Crawford Beck & Amos in 1959, and then to F Bolton & Co two years later. He was an early exponent of the benefits of extending brokerage away from the City of London and opened an office in Poole, Dorset. He retired to Walton-on-the-Hill, Surrey in 1986 to give all his attention to sport, and cricket in particular. He was appointed chairman of the South East Council for Sport and Recreation in 1986.

A life member of Marylebone Cricket Club and Surrey County Cricket Club, he was a skilled committee man. When chairman, he ensured that no meeting lasted more than an hour, bringing long-winded speakers briskly to a close in a manner that seldom drew rancour. He was captain of Sutton Cricket Club from 1962 until 1965 and president from 1982 to 2012.

Brought up by Presbyterian parents who allowed no alcohol in the house, Ohlson remained a man of strong Christian faith, but took care to make life in his own home as much fun as possible. He did not speak to his family about his wartime experiences until many years afterwards when he took them to northwest Europe to see the places where he had fought in 1944-45.

The link can be found: https://www.thetimes.co.uk/edition/register/kenneth-ohlson-obituary-6hqdb3pld